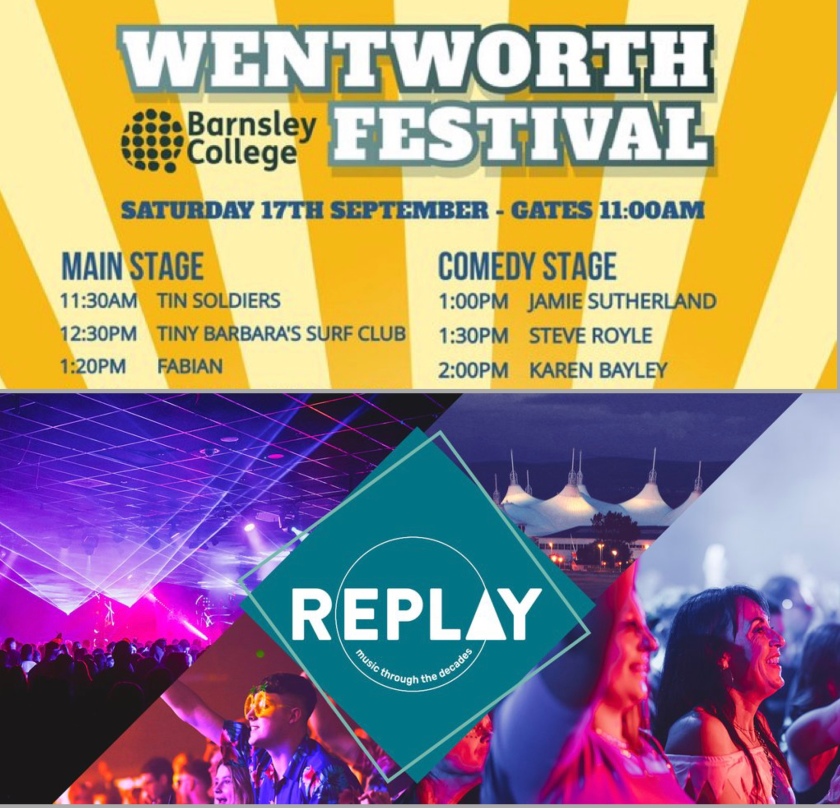 This weekend marks our last two festivals of the summer. Tomorrow we play in Skegness as part of the Replay Music Weekend and today we’re off to Yorkshire to play in the grounds of Wentworth Woodhouse, a Grade I listed country house in the village of Wentworth, in the Metropolitan Borough of Rotherham.

Our film for the day was…

We travelled through some lovely countryside on the way…

In the film, the Beatles were having a pint.

This reminded us that we needed to find a nice local pub for lunch.

Our driver dropped us off outside and we hurried in for a pint!

Keith and I had the Farmers Pale Ale

The others went for the Farmers Blonde!

The food was very tasty.

Two pints later, we set off to find the bus…

After that, it didn’t seem to take too long to get to our destination.

We were ushered in to our boutique dressing room…

then went straight out to have a look around the festival site.

We watched a few songs from Bulsara & His Queenies…

Then headed over to the New Music Stage to watch The Rosadocs!

They were great and we were also spotted in the audience!

We headed backstage for a quick tour of the house.

The Christians were up next…

They went down brilliantly and later on we met up with Gary.

The crowd were building up nicely!

At last we’re on!

The crowd were great and we went down a storm!

We were all starving so we headed out to get some food.

Then we watched Heather Small from front and side of stage.

After a while it was time to get to our hotel in Rotherham so we left the festival site.

Just time for a nightcap before our journey to Skegness in the morning.

What a great day out it was!

Today we’re off to the Replay Music Weekender at Butlin’s, Skegness.

Great breakfast at the hotel and everyone was ready to leave at 11 for the journey to Skegness.

The journey would take about 2 hours but once we’d got off the motorways it was a pleasant drive. Alex was telling us that her grandparents live not too far away from Skegness.

Eventually we arrived at our destination

Inside the big top it was enormous!

We thought we’d have a look around…

It was a bit cold so we headed back

After the game we fancied something to eat and drink so we went back to the dressing room.

We needed to find our apartment to drop our bags off and get changed.

It wasn’t too bad actually but time was getting on and we needed to get back.

Eventually we found the dressing room.

Time to head for the stage!

Fantastic reaction from the crowd!!!

We all really enjoyed the gig and went out into the complex to have a drink.

Alex was dancing with a cow!

They were great and after that we watched Trevor Nelson…

It ended up a great night and we spoke to loads of fans but as time wore on we were getting more knackered so we decided it best to navigate our way back to the apartment before it was too late.

Another great day out though!

After a good nights sleep in our camp, we got ourselves ready and headed out to find breakfast.

Fortunately for us we stumbled upon a lovely couple who had really enjoyed the weekend. They told us the breakfast was only available until 10.30 because of the bank holiday.

We found the canteen just in time as the staff were about to clear everything away!

We needed to clear our heads and walk the breakfast off so we headed out towards the beach.

Eventually we arrived back at the apartments where our bus was waiting for us.

We got on the bus and decided to go straight back to Liverpool as we thought a lot of pubs would be shut because of the bank holiday.

Instead we watched the complete series of Blackadder II which is still incredibly funny.

After that we made ourselves comfortable, closed our eyes and reflected on what had been a great couple of days. A fitting end to our season of festivals.